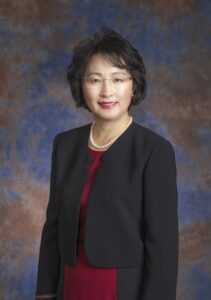 I immigrated to America at age 8 and grew up in L.A. my elementary school was over 90% Latino. Spanish became my second language and I continued studying Spanish until College. God had a plan for me to be tri- lingual and tri- cultural. This background has helped me connect with my diverse community.

My parents were typical first generation Korean immigrants who worked hard and struggled much.  I learned sacrifice and hard work from my parents. The biggest impact in my life is Faith in Jesus Christ. This Faith and our church community  was instrumental in keeping our family together and strong.  I am very close to my parents and maintained both the culture and the language fluently.

I was a tomboy growing up and enjoyed every sports and was in the Varsity Volleyball in High School. I strongly believe in the mental and emotional well being of a child in addition to the academic success.  The American education  system should allow students to enjoy both the academic and the extra- curricular activities.

I am strong on family values. I have been married for 31 years and have four daughters, youngest is a senior in High School. My husband is an ordained Pastor. He retired in 2018 from being the senior Pastor of  New Life Mission Church in Buena Park.  We pastored two ministries, both the Korean and the multi culture (English Ministry).  My husband and I planted this church in 1994. We have ministered to the English speaking second generation Korean Americans for the past 26 years.

I was elected to ABCUSD School Board in 2013. I have served as board President twice. For the first three years , it was majority Democrat. Servant leadership paved the road to being elected as board President. Since then I am proud to share that our Board now has majority Republican vote. One example of this is putting the Resolution to request to Governor Gavin Newsom to Rescind the Covid-19 Vaccine Mandate for Public and Private K-12 students as a Requirement for In-Person Instruction and Oppose Senate Bills 866 and 871. I support parent choice.

My goal is to awaken Californians to fight back for our children and reestablish common sense in the Golden State.

My education and career experience include: